How To Remove A Value From C++ Vectors (Value Based Remove)

Hi guys, if you are working with vectors in CPP you may require some usage of vectors. For example removing a value from vector is some of them.

In CPP vectors, there are two delete method.

One of them erase other is remove.

When you wanted to use "erase" you should consider "erase function only takes pointer" of the value.

"iteratorOfVector" is a pointer. If you want to print it with "cout" you should write it like this:

As I said about "erase" it only takes pointer. If you want to remove "e" value. You should use it like this:

That's why for this usage we can say, this method removes values "index" based or "pointer" based. If you want to remove content of the vector dynamically, for example in the "for" loop you may need to value based remove.

At this point! You should use "remove" function into "erase" function like this:

As you see, you may need more letter of code for removing an item from a dynamic array when you compare it with other languages but unfortunately this is the nature of CPP.

Not : For using "remove" you should include algorithm:

But "remove" function only removes value of the vector address is not removing. For example if you have vector with size 5, after removing value with "remove()" function you still will see your vector has (size: 5) same size. When we use remove into erase we remove value from vector completely and your vector size will be 4 after you size array. It is really as is scenario that we wanted!

Here is good and basic example :

I had need algorithm like these related with my study. After I coded this algorithm example, I recognize vectors and its capabilities better about removing an item from a vector. Thanks to this example I learned differences between erase and remove functions. I hope it would help you too.

Popular posts from this blog

How To Solve Class Not Found Problem in OMNeT++ 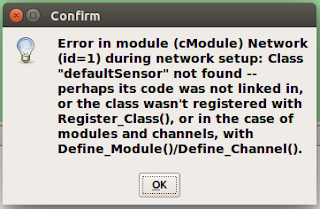 If you are new to Omnet, it is possible to do some mistakes when you are coding your first program. I used to TOSSIM for some months, then I have started to use Omnet. When I am coding my first program on Omnet, I got this problem at first start to simulating code : Error in module (omnetpp::cModule) ag (id=1) during network setup: Class "blogkafem" not found -- perhaps its code was not linked in, or the class wasn't registered with Register_Class(), or in the case of modules and channels, with Define_Module()/Define_Channel(). At first you suppose this problem caused by linked problem of Eclipse ( it is avaible and default omnet editor ). Almost, all of the web sites are focusing on this sitution to solve this problem ( you probably know, if you had searched on google ). This approach is prettym much correct. In this article, I focused an other reason which is caused this problem. For example, we assume, our code is like this in the .NED file: simple blog
Read more

- April 23, 2020
As you know, Yii 1.1 is deprecated. However, There is some old sites that I am seeing still using Yii 1.1 framework. Many years ago I used this autocomplete code in Yii 1.1 framework. Today, I found it in my old work notes and I decided to share it in to the web. It was working well on Yii 1.1 version but, I did not test it in newer versions of Yii Framework. But, it is worth to try it. Because it is a Yii Framework widget and It can work in your project. I hope, It would be usefull. Enjoy it :) $this->widget('zii.widgets.jui.CJuiAutoComplete',array( 'name'=>'s', 'source'=>new CJavaScriptExpression( 'function(request,response) { var tags = '.CJavaScript::encode($zipcodeList).'; var term = $.ui.autocomplete.escapeRegex(request.term); var matcher = new RegExp("^&quo
Read more